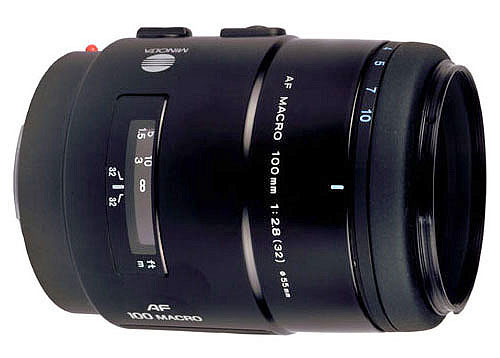 The Minolta 100mm 2.8 macro lens is widely considered to be one of the sharpest lenses ever created. Currently available on eBay for a meager $250 US, it is an absolute steal for anyone who is fortunate enough to use it.

Its follow up after Sony’s purchase of Minolta is the equivalent Sony 100mm 2.8 macro, which is essentially the exact same lens, running at still a pretty fantastic price of $800.

It can close focus down to a miniature 3.5 centimeters from the subject.

And even that close, you can see the sharpness in its full glory.

In fact, once you get this lens, you’ll soon start realizing that noise, blur, and distortions all become a limitation of the sensor in your camera or your own ability to focus rather than the lens itself.

It has a nearly flawless 5 star record at dyxum, which is known to be relatively unbiased and thorough in its user reviews.

But there’s even more – Minolta created a sister lens, the 50mm 2.8 macro which is nearly identical in performance at about half the price. That’s right – you can get one of these beauties on eBay for nearly only $100, which is a unbelievable price for an insanely sharp prime lens that can be used both for macro and as a walk around.

One benefit of the 100mm over the 50mm is that in the field, you don’t have to get as close to get a macro shot. Many users prefer this. However, on the other hand, with the 50mm, you don’t need to navigate quite as large a circle if you want to re-position your tripod.

It supports auto-focus, which some users have suggested requires a bit of hunting at times. You will also find that some models look different than others – the newer version has a thick rubber ring for focusing while the older models use a plastic grip. There is little difference in performance (if any) between the two, and it is really up to the end user which version they prefer.

This lens is only available in the Alpha mount – that means all you new A7R users are out of luck unless you get an adapter that will mount to your camera. For everyone else on a true Alpha mount, such as the phenomenal A99, you don’t need to do anything – buy the lens, pop it on, and you’re ready to go.

For non Sony users, such as those on M4/3 mounts, we would have no hesitation to suggest you invest in a physical adapter to go with this lens for use on your camera. As M4/3, in and of itself, is quite limited with regards to availabl  e native lenses, this is a great, cost-effective steal to seriously amp up your image quality.

Finally, as is expected, once you get into this lens you’re going to soon learn that macros are really, really fun – and to effectively take macros, you’re going to have to learn how to focus stack. We’ll cover that in a later article.